Whenever I see an adult on a bicycle, I have hope for the human race ~ H.G. Wells

As kids our biggest thrill was too learn to ride a bicycle. And as we grew up we graduated to scooters and later to cars. But the Giant Bicycle Company aims at taking us even beyond our automobiles – into the world of cycling and wellness.  Giant Manufacturing Co. Ltd. founded in 1972 is a Taiwanese bicycle company which bills itself as the world’s largest bicycle manufacturer.Giant has manufacturing operations in Taiwan, Netherlands, and China. Giant today is a top brand by itself and sells in over 50 countries through 10,000 retail stores.

An interesting case study written by Prof. Arun Kumar Jain was discussed in our class at Tasmac. Elwin, Bhawana and Ankita presented the case highlighting some of the key strategic issues on Giant’s success.

So how does a small company from a small country become a big global brand?

Great leadership King Liu was a charismatic leader with a powerful an inspiring vision –To be the world’s best bicycle company. It was in Taichung in west-central Taiwan a young 38 year old after trying his hand on several small businesses chose to manufacture bicycles. He realized that riding bicycle was a worldwide trend and his vision went way beyond the profitability of business – he was into the growth of both cycling and cycling culture. Underlying his vision was a strong belief that cycling is good for people’s health and well being and good for the environment.

In the first decade of Giant’s growth overseas sales were very low and it was not because of quality – it was more due a perception of lack of trust in a ‘Made in Taiwan’ product. King Liu resolved to make Taiwan as synonymous with bikes as Switzerland was with watches. It became his dream to turn Taiwan into a ‘cycling nation’.

An inspirational interlude Island Etude is a Taiwanese film. A film about an aurally handicapped college student who grabs his bike, backpack, and guitar and goes on a 7-day, 6-night round-the-island tour. On the way he discovers the natural and cultural beauty of Taiwan and during his encounters with different people he is exposed to local arts, folk customs, and approaches to environmental protection and a host of other cultural enlightenments. http://www.youtube.com/watch?v=pNA_EHD2YCk&feature=related ‘Inspired by the film, Giant’s 73-year-old chairman King Liu decided to circle Taiwan on a bicycle, a task difficult even for a 20-year-old, but one the chairman managed without a hitch’ – says Jeffrey Sheu of Giant .

Sources of competitive advantages Starting as an OEM manufacturer Giant sold exclusively for big brand names Schwinn and Nishiki. But then a day came when its biggest client, Schwinn Bicycles in the U.S., rather abruptly stopped placing orders on Giant. Orders were transferred to Chinese manufacturers due to lower costs leading to a serious crisis. But Giants responded swiftly with a brand building strategy.

Building Brand started from Taiwan: That’s when Giant began to market bicycles under their own brand name in Taiwan. King Liu’s cycling trip was symbolic of cycling being a combination of lifestyle and leisure and also a natural expression of success in life. As a result Taiwan enthusiastically celebrates the first Sunday of May as national cycling day. 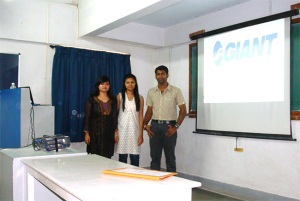 Giant went into an image change overdrive from the older heavy bicycle stereotype to state of the art high-end bicycles. Commitment to sport of cycling reflected through sponsorships of professional and amateur teams at International and regional levels. Global Giant Mountain Bike Team and ONCE level 1 road team became trend setters. Such sponsorship allows product developers to see their designs in real world settings leading to further product development.

(a) Innovative and entrepreneurial capabilities were triggered through the bicycle ‘cluster effect’. Michael Porter in his cluster theory highlights how several competitive benefits (innovation, knowledge exchange etc)  accrue when interconnected players within an industry are concentrated in close proximity – in this case the Taiwanese bicycle cluster.

Global Giant Local Touch – this ability was another source of competitive advantage.  Giant’s worldwide HQ oversees global considerations and coordination such as brand mgt, product R&D & finance etc. Global standardization through their superior wheel system and a light bicycle frame system were patented and standardized (75%) for their products globally to achieve economies of scale.

The local touch was captured through Giants regional sales companies who were given freedom to collect analyze and react to local consumer needs and market trends with 25% customization. As a result Giant US and Giant Europe sell different selections of bicycles. To understand the Chinese environment and draw maximum value from Chinese JV partners’ unique lower cost manufacturing skills Giant practiced Guanxi in a spirit of trust and mutual respect and cooperation.

The Dutch just love their bicycles and ride them everywhere. It was natural for Giant to pedal into this bicycle-friendly nation as an

gain firsthand experience riding in one the most cycling friendly nations in the world. It is King’s hope that his Green World on Wheels Tour will open up communication with The Netherlands as Taiwan continues to improve its own cycling infrastructure.

In 1980s Giant overtook American manufacturers with lightweight bicycles and the European market with MTB (Mountain Bikes). In addition to light weight frames were their high-quality shock absorber and aluminum alloy bikes. The Giant name now is synonymous with technological innovation and the state-of-the-art throughout the global bicycle industry. Giant continues in 2011 to top all other manufacturers in prestigious events and reviews of best bikes in the world market.

We end this post with an inspiring quote by Sir Arthur Conan Doyle – “When the spirits are low, when the day appears dark, when work becomes monotonous, when hope hardly seems worth having, just mount a bicycle and go out for a spin down the road, without thought on anything but the ride you are taking.”

An open mind! Love to share my thoughts and a keenness to learn. An engineer and a MBA I had a wonderful innings in the Army and later moved to consultancy and teaching. My current interests are music and growing culinary herbs. Love to play golf and do yoga regularly. I am serious on "Living life less seriously". A warm welcome to you be well and be cheerful always.
View all posts by dilipnaidu »